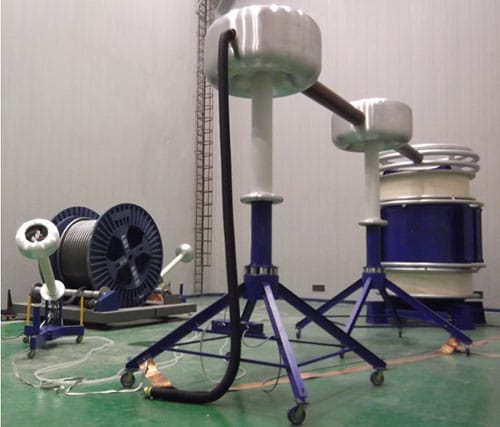 Selecting the correctly designed resonant test set for typically complex testing applications requires a great deal of expertise and a technically experienced application team. The information below is a general guide for the decisions that will be faced during the selection of an RTS that will meet one’s testing requirements.

Resonant test systems (RTS) have been used worldwide for over half a century for the testing of dominantly capacitive test objects. You may be wondering what is the theoretical concept behind resonance or how does it work.  Below is a basic description behind resonance.

Onsite or Laboratory
Many RTS will function both as an onsite or lab type system. However variable frequency sets only are available with a cylinder type reactor. This means that clearance needs to be accounted for all around the reactor. Many lower power systems have been especially designed for mobile testing using variable inductance which are mounted in “Sprinter” vans, cargo trucks, skid mounted, or shipping containers. These types of systems take advantage of a tank type reactor with a HV bushing .

Loading Determination
It is extremely important to gather loading data for every type and size of test object that the RTS will be challenged with testing. The better the data the better the testing solution. RTS’s are generally custom designed around the load to be tested. The overall power requirements, whether it be the real power supplying the set or the reactive power of the reactor can be maximized with the use of output voltage taps on tank type reactors, or cylinder voltage and current sizing for series / parallel set-ups.

PD Measurements
Many precautions can be taken into account during the design stage that will aid the user in successful PD testing after project delivery. The inclusion of items such as an isolation transformer on the incoming line of the test set, LV filters for incoming noise, L-C or C-L-C filtering the output of the RTS for additional dampening of line noise and interference, and Pre-load / Coupling Capacitor sizing compared to total capacitive load for optimum ratio are a few options that can be utilized.

Test Object Terminations
This becomes specifically crucial when dealing with MV and HV cable testing. The RTS needs to be sized to also account for the losses in the termination type. For example when HV cables are terminated in a water termination there is a large generation of resistive heat that must be supplied by the regulator and exciter.
Termination and voltage connection issues also become extremely important in the GIS application field. Often GIS vendors are collaborated with during the design phase for incorporation of Oil-GIS reactor bushing designs or Air-GIS bushings for other designs.